If you fancy a walk, cycle or motoring tour when you visit our aviation heritage sites, alongside our regional trails series here are some other suggestions for walks, routes and trails in the great outdoors: 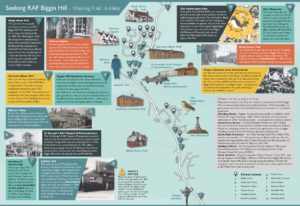 Another heritage trail tells the story of RAF Kenley and the men and women who served there. RAF Kenley is the most intact fighter airfield associated with the Battle of Britain, alongside the meadows and ancient woodland of Kenley Common. There are still a significant number of structures remaining from WW2, which have become some of the youngest scheduled ancient monuments in the country.  Kenley Common is located in the London borough of Croydon and is open and freely accessible all year round. The trail information is on signs and information boards around the perimeter of RAF Kenley Airfield which is still in active use by the Ministry of Defence. A map with the sign locations is here.