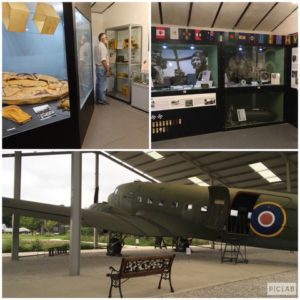 After being closed to the public for nearly two years, Metheringham Airfield Visitor Centre is now open! The museum tells the story 106 Squadron and of the people who lived and worked at RAF Metheringham during the Second World War.

Brand new for 2021 is the Commonwealth of Comrades exhibition, which tells the story of the men and women who came from across the globe to serve at the airfield. Visitors can learn about each Lancaster bomber crew position, the equipment each crew member used and the training they had to do. Another new feature this year is the Ditching Display, which features the museum’s rare World War 2 aircraft dinghy and a range of artefacts relating to ditching in the sea. The museum is also home to Dakota KG651, a veteran transport aircraft that saw active service in 1944 and 1945.

The museum is open on Wednesdays, Saturdays, Sundays and Bank Holidays between 11am and 5pm. We look forward to welcoming you back and thank you in advance for your support. To find out more visit www.metheringhamairfield.co.uk.
Back to News
Share