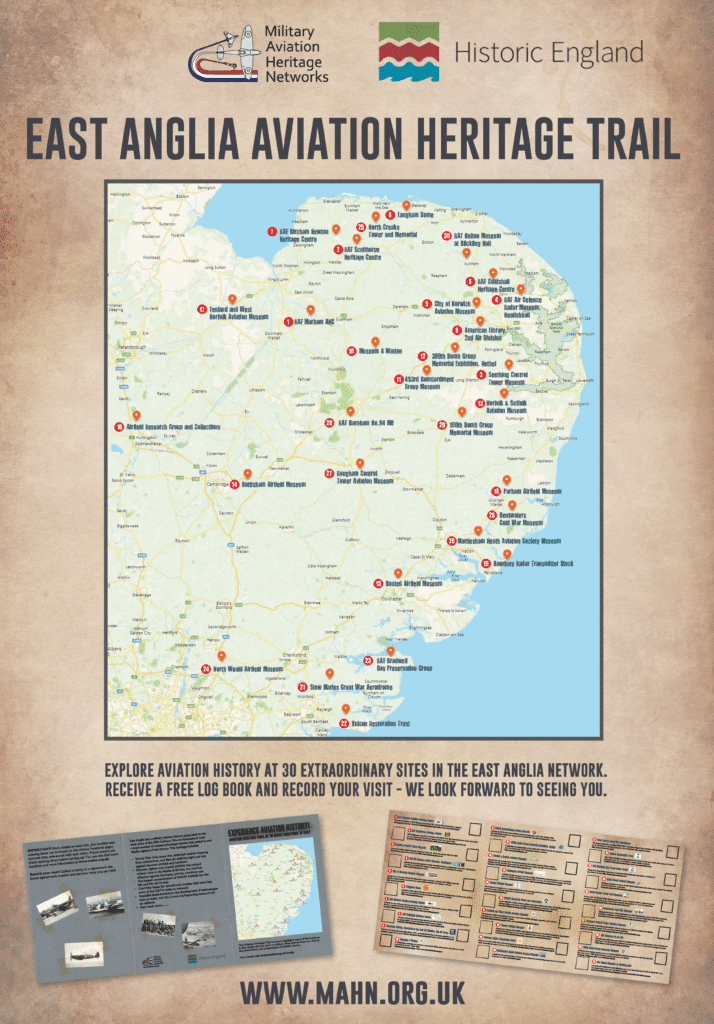 A new heritage trail to highlight the rich aviation history of East Anglia was launched today by Military Aviation Heritage Networks. The trail features 30 historic airfields, museums, memorials and aviation sites concerned with aviation history ranging from First World War bases that protected the country from airships and bombers to the Cold War bases for aircraft and missiles. Many sites are located at airfields used by the RAF’s Fighter and Bomber Commands that played roles in the Battle of Britain and the bomber offensive against Germany.  The area is also well known for having the largest concentration of US Air Force airfields for the 8th and 9th Air Force.

The trail features an array of historic buildings and features including an atomic bomber base, a radar transmitter block, an anti-aircraft gun dome, control towers and numerous airfields and aircraft hangars featuring fascinating collections of aviation heritage that are accessible to the public. East Anglia has numerous smaller, lesser-known sites with unique collections that bring alive a huge range of aviation history.

Funded by Historic England, a trail booklet featuring a map, site summary and websites for 30 of these sites is available to download for free online from the East Anglia trail page and printed copies can be picked up at the various museums, airfields and heritage centres involved.

RAF Marham Aviation Heritage Centre historian and author Ken Delve said: “This is a wonderful guide for anyone living in East Anglia or visiting the area with an interest in aeroplanes and aviation history and would like some inspiration for some great days out. This guide can help you find fascinating sites that will appeal to all ages. Many sites have shops and cafes, and the map makes it easy to link up several sites to visit comfortably in one outing.

This is also a great way to support museums and heritage sites that had to close last year and have been hit hard financially. Most are run by volunteers who feel passionately about aviation and love to share the incredible range of sites and aviation history we have in East Anglia.”

Wayne Cocroft, a senior investigator at Historic England commented: ‘East Anglia has some of the most significant places associated with aviation heritage in the country.  We are pleased to support this initiative and through this trail encourage people to explore the stories that have helped to shape many of the region’s communities over the past century.’